Los Angeles police said that A senior was mauled at around 4:30 pm adjacent Whole Foods on the 7th and Olive streets.

Several witnesses reported that a transient man who appears to be mentally disturbed kicked and punched the elderly man who happens to be a resident of that area.

Waltay Simmons, a security officer from the Whole Foods grocery store personally witnessed the attack and rushed to rescue the victim. He pepper-sprayed the deranged suspect and held him down while waiting for the police to arrive at the scene. 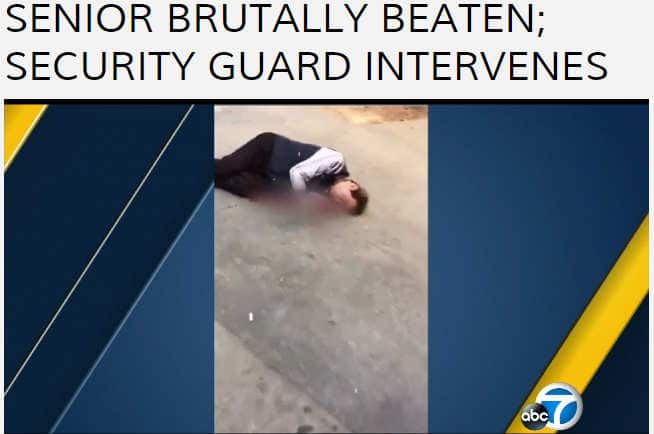 The mentally ill suspect tried to escape but Simmons got hold of him. “When I asked him what was his problem, he just said ‘He tried to rape me,’ and then he turned and looked at me and started charging at me, so I pulled out my pepper spray and pepper sprayed him. And then he dropped all of his stuff, tried to run away and I tackled him to the ground and handcuffed him,” said Simmons.

Another witness, Tessa Morales, witnessed the mauling from her second-story window.

Residents in downtown L.A. have had traumatic encounters with homeless people who are on drugs or/and psychotic.

With the rise of incidences similar to this, the L.A. City Council voted last week to regulate the amount of stuff that homeless people can place on the sidewalk. They also proposed to limit the hours that the homeless can sleep in the streets of Los Angeles; which is between 9p.m and 6 a.m.

L.A. Police has arrested the suspect and is now facing charges of attempted murder.

It is the duty of a security officer to protect property within his jurisdiction but in the case of Simmons, he did not limit his role to safeguarding Whole Foods grocery store as he helped out an elderly man who was being attacked by a lunatic across the street. He stopped the mauling by pepper-spraying the man and holding him on the ground until the police arrives which is a security protocol to prevent a disturbed man from inflicting harm on his victim as well as other people in the vicinity.

For more information, check out this news article.