Officer John Resetar operated a large chain of gas stations, convenience stores, and car washes for over 40 years before these were all bought-out by corporate America. Around nine years ago, he decided he needed a career shift and went to apply as a security guard at Franklin Regional High School. He then switched companies to Capital Asset Protection after 2 years but still stayed at Franklin Regional High School. He did not know that he was destined for something greater that happened on April 9. 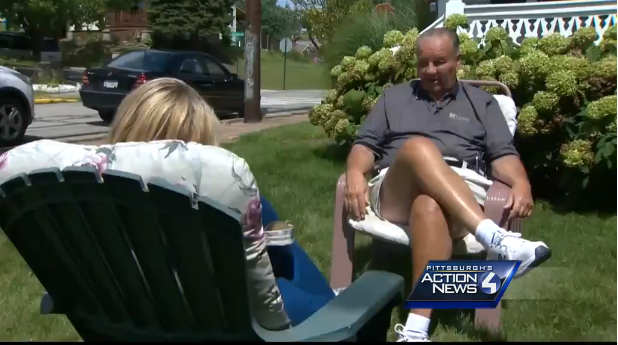 Seventy-year-old Resetar or “Sarge” to many teachers and students at the high school was just starting his day at work on that Wednesday when he together with Buzz Yakshe, the Murrysville Police school resource officer felt that something was out of place.

“I saw a group of kids running and screaming going past our windows,” Resetar recalled.

The fire alarm was off and Resetar rushed towards the cafeteria while Yakshe went to the nurse’s office.

When Resetar got to the entrance of the cafeteria, he saw a pool of blood on the floor.

He then looked inside the cafeteria and saw that there was no blood inside. “As I turned back, I saw two people coming down the hallway toward me. At that point, I didn’t recognize who they were, I was just telling them to turn around and get out of the building,” he said.

Sophomore student Alex Hribal who held a kitchen knife stabbed Resetar right under the heart.
Unfortunately, 16-year-old Hribal had already stabbed 20 of his classmates and Resetar became his last victim.
“I was down against the floor, I had fallen down on the floor, and the next thing I knew, he was coming at me again. That’s when Sam King, who must have been that other person at that time, coming down the hall who I didn’t recognize, tackled him,” Resetar said. “Sam had him down, but I was afraid he wouldn’t be able to hold him, so I jumped up and had a hold on each of his hands, controlling the knives.”
King who happens to be the assistant principal of the school tackled and subdued Hribal. Resetar then jumped to grab the wrists of Hribal.

Joan Mellon, assistant principal, also grabbed the knife and threw it away from the suspect. “There was the three of us struggling with him and Joan Mellon finally got the knife away from him and threw it down the hallway away from us. The other knife was in such a position that she couldn’t get to his hands without getting cut. When she got the one knife off, it freed my other hand up. The only thing I could think of doing at that time was punching him three times, and he dropped the knife,” Resetar recounted. “During, when I had his hands, I was just praying I wouldn’t pass out until we got the knives away from him.”

Resetar was acclaimed as hero by police officials, school administrators, parents, media, and students for his heroic actions that fateful day which ended the attacks.

“I got so many hugs,” Resetar said. “The amount of parents that came up to me, it was just unbelievable at that time,” Resetar said.
Last year, winding down on his summer vacation and preparing for the upcoming school year (his 10th year in service), he received a letter while having his breakfast. The letter was signed by Jeffrey Dahlke, the Regional Security Operations Manager of Capital Asset Protection Inc. and states that he is no longer needed in the service.

“Pretty hurt really. Anybody can hire or fire anybody they want. The thing that got me was they didn’t even have the common courtesy to call me in and talk to me or call me. I get it through a letter,” Resetar said. “I want to know who was involved in making the decision.”
Mary Catherine Reljac, district’s assistant superintendent confirmed that they met with officials of Capital Asset Protection and discusses the standards they require for security officers to prevent similar stabbing tragedies from happening again in the future. But, reiterated that they never said to fire Resetar.

Reljac also states that as of Monday afternoon, no copy of Dahlke’s letter to Resetar was received in the office.

“From what I’ve seen, it reads as though that letter came from us. That’s frustrating for us as a district because we would really like to know what is going on so we can better respond to it,” Reljac stated. “I can tell you we were surprised as a district. We were unaware that his employment had ended there.”

She was also disappointed and disheartened with how Resetar was informed about being dismissed from his post.  No information was also obtained from Capital Asset Protection Inc. They did not even respond to media queries.

“I never got a chance to actually talk to somebody about what was wrong or what we could do,” Resetar said. “I got up at the same time this morning, and I got up like I was going to school. The clock in my brain went off at that time.”

Resetar’s attorney believed that his age and his being open to district officials was what probably made him lose his job.  Capital Asset Management Inc. had the final say to that.

The heroic security officer is now looking for another job. What a dismal scenario for someone who risked his life to save students and school administrators from further harm during that tragic day. I believe that Capital Asset Management Inc. owes him an explanation or at least a face-to-face feedback on how they were able to come up with that decision. He did his best to protect and secure the school along with the students and teachers which stopped the stabbing incident. He deserves a better response or treatment that what he is getting now.

To know more about this story, check out this news article.